I always felt different when it came to my emotions, even as a little kid. I would feel things much more deeply than other kids my age, and I have always been a constant worrier. I found early on that the best way to avoid heartache, sadness, and really any type of negative emotion was to control as much of my life as possible. If I could control what I was doing, I could reduce the anxiety that came from feeling like something terrible was lurking right around the corner.

I was incredibly independent and resourceful at a very young age. Of course, this was constantly praised as a positive quality by my parents and teachers, and I began to live on praise. Praise meant I was doing a good job, and that I could continue what I was doing. Praise ensured that I could stay in control, and it provided more insulation from my fears and worry.

When major changes in my life hit, I looked for ways to gain an increased sense of control. When I started kindergarten, and I began to experience the pressures, however subtle, of schedules, testing, and feeling the need to excel (Praise! I need all the Praise!), I would go home after school and raid the fridge. For the first time, I experienced the quick “high” of an oatmeal cookie or a piece of bread. It was not surprise that I became overweight between kindergarten and first grade.

Being overweight brought with it more anxiety. I felt that I wasn’t pretty, that I was seen as lesser than my thin friends. When the pressures of junior high made this anxiety unbearable, I added another layer of self-control and became anorexic and bulimic, losing 30 pounds in 4 months in seventh grade. The praise I received for “losing my baby fat” was enough to keep going, and because of my age my eating disorder flew quietly under the radar. Even when my skin turned a strange shade of gray and my hair started falling out, my parents were convinced I needed to see a dermatologist, not a psychologist.

The eating disorder eased up in college, when I found that one of the control strategies I learned in high school—filling my schedule with activities—was even more attainable on campus. I joined so many clubs and groups, it would be ridiculous to try and name them all. There was no time for sitting, for thinking, for feeling. Just keep moving. And this strategy served me well into adulthood.

Until a few years ago, when I started having panic attacks at work. I would be completely calm, reading emails and typing up documentation, when my heart would start racing and I would be overcome with a terrible feeling of fear and doom. They started few and far between, maybe only one or two a month, and then became so frequent I was having them almost daily. I was afraid to leave my private office for fear that one would occur while I was conducting an employee review or working with a patient.

My doctor prescribed anti-depressants, but none seemed to do anything. found a therapist, and through very tough behavioral work, I was able to gain control of the attacks for a year or two. But then they came back with a vengeance. My therapist suggested I see a psychiatrist, who within the first 15 minutes of our session asked me if anyone in my family was being treated for ADHD. I told her that my son had been diagnosed years before, and she smiled.

“Would you be willing to take a few tests to determine if you have ADHD?” she asked.

“There’s no way I have ADHD, I am the most productive person I know. I have been extremely successful in school and in my professional life, I don’t think that’s the issue.” I wondered if the psychiatrist had even been listening to me describe my problems. I had anxiety, not focus issues!

The results are in

I took the test. Spoiler alert: ADHD. I thought about all the times I lost things, how it’s a running joke in my family that I could never find my shoes, my keys, my phone, my purse. That I can’t concentrate in a room where there is a loud TV running in the background. That I make lists for everything, check them numerous times, and I start packing 2 weeks before going on a trip because I am afraid I am going to leave something out.

That’s when the psychiatrist explained to me, “Your whole life you have controlled your environment as much as possible, so you could be successful. Have you ever considered that your fear and anxiety over things you couldn’t control could be stemming from your need to cover the “mistakes” your ADHD might reveal?”

I took the Adderall prescription and reluctantly started on the lowest dose. Within days I noticed a decrease in the attacks, an increased ability to sit still, and an overall sense of calm. I lost my phone less, I enjoyed times of unplanned activity more. I had to admit, at 40, that I had suffered from ADHD my entire life.

While I’ll always be Type A, a bit OCD and all of the other letters that make up my alphabet of personality characteristics, I am now OK—and enjoy life more–living with ADHD. 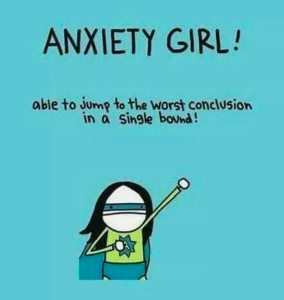