As a born “do-er,” this verse has always annoyed me, much in the same way that I don’t like it when Jesus tells Martha (the original hostess with the most-ess) to slow her roll and savor the moment in the middle of the big party she was throwing for JC and friends.

“Worker bees” thrive on consistency, order and–most importantly–action. However, in the original Hebrew text, ‘Be still’ doesn’t refer to a physical limiting of activity but rather a call to become weak, to let go of control, to be vulnerable, to release. Further words derived from this root refer to “the place of the dead.” Doesn’t really get more “still” than dead, does it?

At the beginning of a new year, when so many people are deciding their “word” or “motto” for 2018, the worker bee of my soul is crying out “STOP.” “You are not what you DO, what you PROVIDE, or what PRODUCE.” Much the same way our bodies will eventually reward us with a major illness or disorder if we continue to fail to give it what it needs, my soul is toast. I’m broken and it’s been quite a while since I’ve felt I was in control–and maybe that’s the point. This verse is my talisman going into 2018.

“Let go of control, be vulnerable, feel everything, and know that I am Love.” To myself, from God:  You don’t need to do, to give, to make, to schedule, to plan, to create, to organize, to sign up, to recruit, to memorize, to volunteer, to DO ANYTHING AT ALL. IN FACT, JUST STOP IT RIGHT NOW. Learn to sit, to undo, to savor, to release, to let go. And there you will find the Love that will sustain you. Because Love is all around you, if you will just be still. 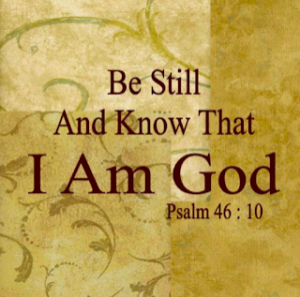