The alarm goes off at 7am. I had every intention of setting it for 6 and working out, but I ended up watching Kimmel and scrolling through Facebook until 11pm, so 7 it is. Must go to bed earlier tonight. I shake my daughter, who has crawled into bed on her dad’s side like she does in the wee hours of every morning. She’s learned to go to Jim’s side because I will wake up and take her back to bed and pretty much nothing wakes up Jim. Smart girl.

Fumble into the bathroom, search through every drawer to find a hairband for me and another one for Maryn–more on that later. Where do those things GO?? Seriously, does the dog eat them?! Trip over a plastic princess slipper and a witches broomstick–WTH? It’s April, how long has this been in here?!–on the way to the toilet.

No paper on the roll. No paper in the thingy that holds the extra rolls. No paper in the secret stash compartment where I keep the emergency roll for times like these. I find a small travel package of Frozen Kleenexes where the emergency stash should be and feel like someone in my family has played a cruel joke. Whatever.

I shake the sleeping beast that is my daughter, and she angrily pulls the blankets over her head and tells me that she got no sleep last night. Which is complete BS, because I heard her snore over on her dad’s side from about 3am on. I run to her room, grab an outfit from the closet that I know she won’t like because she doesn’t like anything at 7am. I toss that an a pair of underpants and socks on the bed and say a prayer to Jesus that she is dressed before I see her again. 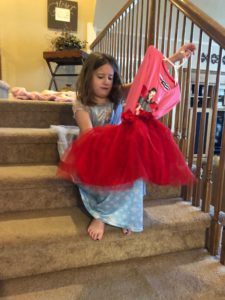 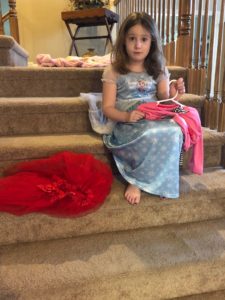 Rush into Will’s room, where I shake the sleeping unicorn (he sleeps in a unicorn onesie, I shit you not), tell him to make sure he showers and USES SHAMPOO and I hear a thud that tells me our French Bulldog-Boston Terrier mix Olive has decided to start her day, which translates to “hurrygetherdownstairsandoutsidebeforeshepeesonthefloor.”

I rush her out the back door, and it’s raining, which means she stares at me blankly like she has no idea what she is supposed to do out there and refuses to move. I walk out onto the deck, chase her down the stairs and wave to my neighbors that are driving by, looking all polished and ready for the day, and have the fleeting thought that I probably should have grabbed my robe. Howdy neighbors. Bet you didn’t know you’d get this view every morning. Just a bonus that comes with the house.

I turn on Good Morning America, which we never actually watch, just need the calm voices of Robyn and George in the background to drown out the chaos that is breakfast. “What do you want to eat?” Mini-muffins, cereal, leftover mac and cheese—I throw down whatever is easy and fast and ohmygodthebusiscomingineightminutes.

I spray the detangler, which I liken to the “monster spray” I used to spritz around the kids’ bedrooms when they were little and afraid. It doesn’t really work, and it’s just water with some fragrance, but if she believes it helps then JUST WHATEVER, MAN.

I have tried approximately seventeen thousand different hairbrushes over seven years, and I have yet to find one that doesn’t make Maryn scream like she’s being dipped in boiling water. And that’s before the brush even touches her hair. The Wet Brush is her “favorite,” if there is such a thing when it comes to tools of torture. I start raking through her tangles, doing whatever I can do to speed up the process. She then proceeds to tell me that “I like to hurt her” and that “this is the worst day of her life.” Not sure where the drama gene came from.

Olive knows when the moment is coming. She sees the brush and runs as far away from the kitchen as possible to protect her ears and her sanity. Smart dog.

Did I mention that this crazy hair fiasco every morning is just to get it into a ponytail? I’m not asking for a bun, or a French braid, or anything that the other girls in her class wear that look like Pinterest pictures. I just want her damn hair out of her face is that too much to ask please and thank you!

Ponytail is lopsided but workable, and with two minutes two spare before the bus arrives, something I can only describe as black magic takes over the house.

LITERALLY everything my two urchins need to get out the door and on the bus (swing low, sweet chariot, coming forth to take my kids school) DISAPPEARS. In a feat that only David Blaine can pull off, vital items like backpacks, coats, shoes, Chromebooks and assignment books are missing from the exact places my children told me they “just saw them.”

Knowing that sweet, sweet serenity is in view, I hug the girl (but not the boy, because that would be “uncool,”) ruffle the boys hair (which is still “uncool” but he tolerates it), tell them I love them and wish them a great day at school.

And as the bus pulls away, I take a long, cleansing breath—like the ones they tell you to take in yoga. And my blood pressure drops a bit. And the wrinkles in my forehead relax a little. I made it. We made it. Now it’s time to tackle the day. But first, coffee. 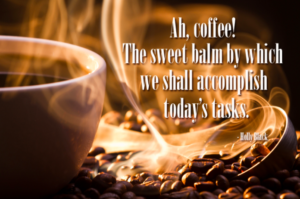 What does your before-school routine look like? Any tips and tricks that have made it more manageable? Leave me a comment below!