When I started this “life change” journey back in September of 2017, I really thought that I’d have a few months of figuring it out that might be a bit challenging, but if I was really following my true purpose then everything would sort itself out and by fall of 2018 I’d be merrily rolling along with a new roadmap and a new plan.

It’s been 18 months since I walked away from stability and toward purpose, and most days I don’t feel any further along professionally than I did when I started. In many ways, these last 18 months have been the hardest of my life. On the road to finding myself, it seems I keep losing so much of myself along the way. These last 18 months I’ve lost money, lost titles, lost my beloved mother-in-law, lost the certainty I had regarding my spirituality. I’ve lost relationships with friends and upset family members. I’ve lost so much sleep somedays I feel like a zombie. Some days (weeks!) I feel like I’ve lost my motivation. Much of this journey so far, I’ve just felt…lost.

I was excited to leave 2018 behind me as I celebrated the start of a new year sitting on a beach overlooking the ocean. I imagined the struggles of the previous year rolling out to sea as I inhaled the salty air and allowed it to blow through my hair. This is going to be my year, I told myself.

And we all lived happily ever after. Except not.

The minute I returned home after my beach trip, my intentions began to unravel like a thrift-store sweater. Job opportunities that I had planned for the new year began to fall through, one by one, until I had to admit that I wasn’t bringing in enough money to pay the bills. Hard conversations about how to cut the family budget brought more stress, aggravation and anxiety to a marriage that had already been through so much.

The Midwest experienced one of the worst winters on record, and the brief moments of peace and quiet that allowed me to catch my breath while the kids are at school were replaced with ELEVEN snow days. My kids did not attend a full week of school in 2019 until the week before Spring Break. The strain of so much togetherness and all the rescheduled activities left my nerves raw and jagged.

In January, my husband found out he needed to undergo a pretty extensive tendon reconstruction surgery that would leave him unable to drive for at least 12 weeks. I was immediately thrown into the roles of chauffeur, 24-hour caregiver, therapist, and scheduler—important roles, but not ones that are particularly pleasant or stress-free. And when you’re the sole driver in the house, small things like getting everyone to appointments, sports practices, birthday parties and therapist visits combine with trips to the grocery store and pharmacy, running errands and pretty soon I felt like half my day was spent in my car driving to nowhere I really wanted to go.

Larger hard knocks like getting pneumonia, hitting a pothole that destroyed a wheel of my SUV, a broken washing machine and issues with cell phones have not played well with my already damp spirit. The salt of the sea breeze I could taste just a few weeks ago now seems like a dream…if I were able to sleep enough to dream. 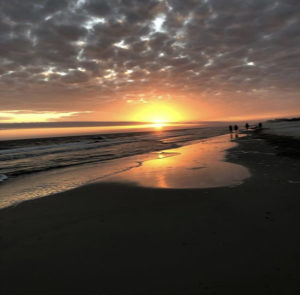 I’ll be brutally honest and say that life since January has been REALLY FREAKING HARD. Some days just willing myself to roll out of bed and put two feet on the floor requires a mental cheerleading session. I’ve struggled my whole life with bouts of depression and anxiety, so I know the drill when it’s time to get into the therapist or the nurse practitioner. This isn’t like that. This is just a lot of crappy stuff on top of a lot of other crappy stuff without time to process most of it. And unlike the doom and gloom feeling of being followed around by a black cloud, I can hear God telling me constantly…”you are growing.” And as much as I would love for this growth to be over with I know somehow that there’s not light at the end of the tunnel yet. But there will be someday.

When you’re going through a rough patch, especially if you have a small army of people depending on you for their survival, taking time out for “self-care” seems about as doable as flying to Chicago for the night to see Hamilton. (A girl can dream!) But finding brief moments to pencil something for ME on my schedule have at least offered some breaks in the monotony.

I have great friends who have been awesome with me through this. Texts, phone calls, and girls nights out and lunches have given me so much to look forward to. Friends have offered to be taxi drivers for my kids. I’ve received gift cards from family for nights where I’m too exhausted to cook one more meal or clean one more dish. One friend invited me over to her house one evening to drink wine and make essential oil-scented lotions, minty lip balms and calming face toners. We looked like mad scientists but it was so much fun. And now when I use the products I created I can feel the love of that evening. Little bits of sunshine peeking through the clouds. I’ve talked to a lot of friends going through a similar transitional time, and most of them tell me that this process can last for years. It’s not the most encouraging piece of information on those days when I am one “Mom, can you help me with…” from losing my mind, but at least there’s hope for those of us that can’t see where we are headed and the path is dark.

When it comes to clichés, the butterfly as a symbol of renewal and rebirth is one of my least favorites. From lower back tattoos to an entire Mariah Carey album, the butterfly gets a bad rap for its overuse and cheesiness. But maybe it’s because when we think about a butterfly, we usually don’t think about the brutally awful process it has to go through when changing from a caterpillar.

On a day when I was feeling particularly trapped, I came across an article describing the process of what actually happens to the caterpillar when it’s in the cocoon, making its transition. It was definitely NOT what Eric Carle has had us believing about Very Hungry Caterpillars since our preschool days! Once the caterpillar is encapsulated in the cocoon, it starts digesting itself. Read that last sentence again, unless you’re reading this on a lunch break. The caterpillar literally starts breaking itself down into caterpillar soup, and only the precise groups of cells required for it to become a butterfly survive the process. Here’s the craziest thing: these cell groups have been lying dormant inside the caterpillar since before it was ever born, just waiting to be discovered in the decaying process.

Once everything inside the cocoon has been dismantled, the groups of cells needed to create what is needed for the butterfly begin to feed off the soup that was created by everything that isn’t needed for the transition. If you were to cut into a cocoon while this process was happening, you would botch the whole process and be left with a pile of mush, and it would never turn into anything else. But, if you just leave everything alone to work the process, the transformation will take place exactly as it has for millions of other caterpillars throughout millions of years. It’s not pretty, but it works every time.

I’m sure you can see where I’m going with this.

And so, for now, I am willing to stay in the mess a little longer than I’m comfortable with. I’m willing to believe that this process is breaking down every part of me that is not needed for the next phase. And I can admit that it’s messy and brutal and I’m uncomfortable and feel trapped and I can be honest about not wanting to be in this phase and not have to grin and bear it all the time. Because if this were comfortable, I’d probably just give up instead of pushing forward.

So, if you see me around town these days, my eyes might be a little puffy, my hair might be full of dry shampoo and my socks might not match…if I bothered to put any on at all. This isn’t a time for “pretty.” It’s a time for survival. And if I don’t show up to an event, or cancel at the last minute, please know that it’s not you–it’s me. I couldn’t get the soup contained enough to be functional and needed to rest. Drop me a text, ask me to lunch, send me a funny meme. It will mean the world to me to know that you care.

And there WILL be an end to this process, even if I can’t feel it right now. I can be assured that what will be left after this breaking down will be those qualities within me that have been here all along, waiting to emerge at the right time for the right purpose. And I will allow these qualities to be strengthened and fed by all that is no longer needed for the journey. I can trust the process, because it works. And it has for a million years. And I can live with that and allow it to bring me hope for this part of the transition.

But, don’t you worry–I’m still not getting a lower back tattoo of a cocoon any time soon. 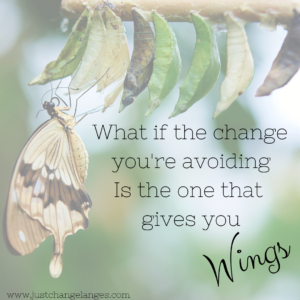