Tomorrow is Mother’s Day. The day that strikes fear in the hearts of new dads everywhere, and a day that for most Moms is just like any other Sunday–especially when there are actual children still living under the roof of said mother.

I remember being pregnant with my first child on Mother’s Day, dreaming of the following year, when I would take my place with all the other women who are celebrated on that day. I can’t remember the specifics, but I think it involved a meadow, a picnic, and a smiling baby boy content to stare up at the clouds and coo while Jim and I smiled at each other across deli sandwiches and contemplated our perfect little trio.And my first Mother’s Day was exactly like that.

Except the total opposite.

I spent my first morning changing into three separate dresses because the first two still didn’t fit (stubborn baby weight that didn’t magically disappear by breastfeeding, made more stubborn by my Chex mix binges during feeding sessions–“eat when the baby eats” seemed like a good idea at the time), and the other dress was covered in projectile dried spit-up by my colicky 7-month old that I hadn’t noticed the last time I wore it. I went with something that vaguely resembled a pop-up tent and felt just as utilitarian.

I spackled on under-eye concealer like it was my job, because even at 7-months of age my tiny red-headed tyrant wasn’t sleeping more than 3 hours at a time. Jim and I headed not to our own church, but to his parent’s church because my mother-in-law guilted us into sitting with her in the pew on Mother’s Day and I was too sleep-deprived and worn out to argue otherwise.

We spent over an hour after church waiting for a table in a restaurant in a century-old building where the air-conditioner had decided to take the day off. It was roughly as hot as THE SURFACE OF THE SUN and I was trying to keep my baby entertained, which meant after about 30 minutes of swaying and rocking we both looked like we’d been caught in a torrential sweatstorm. After a lovely meal of sad lettuce leaves, cold soup and some sort of protein-mayo concoction on a croissant, I was ready to bolt out of there like a Kentucky Derby horse and started to buckle Pryor into his infant carrier. Free at last!!!

And that’s when the smell hit my nose.

What sorcery is it that babies can shit 5 times their own body weight in a single grunt? And is it too much to ask that we can put a Tesla into outer space, but engineers can’t come up with a diaper that can handle the poop bonanza of an infant? I briefly thought that I could just throw a blanket over the whole damn smelly mess of poo and baby and skedaddle it home to safety. I adjusted the square carseat buckle between Pryor’s legs and realized immediately that I had made a terrible miscalculation…

My hands were now completely covered, from fingernails to wrists, with babyshit. I cried out to Jim (why wasn’t he doing this?! Where WAS he?!) and he came to my rescue by handing me napkins—the cloth napkins that PEOPLE WIPE THEIR MOUTHS WITH!!!  Nonononononono…

At this point, trying not to draw attention to the situation was futile, and I was screeching “WIPES!!!  I NEED WIPES!! CAN SOMEONE HAND ME THE WIPES!!” so loud that all the the grandmothers in the joint were adjusting the level of their hearing aids.

Once I got my hands functional again, I made a super-rookie mom move. Instead of taking the whole carseat–baby, shit, wipes and all—to the bathroom, I somehow thought it would be easier to remove said baby (who was now in full-on blue-faced screaming mode) from the carseat and clean him up in the bathroom. I grabbed my precious little poop factory, who had now squirmed so much he had fecal matter from his ankles into his hair, wrapped a blanket around him…“We’ll be throwing this one away”…and started for the bathroom.

I suddenly felt something warm drizzle down my bare shoulder, onto the back of my sleeveless dress. As the smell of crap mixed with something that I can only describe as the smell of rotten mozzarella washed over me, I realized I had been baptized in spit-up from my shoulder to the backs of my knees and was now standing in a white semi-solid puddle of half-digested formula and something that looked like pears. I ran for the bathroom before any other bodily fluids could erupt from Mount St. Pryor.

When I got to the bathroom, I realized that it had no baby-changing facilities—what is this, the nineties?—and I plunked my poo-and-spit-up-covered son down on his shit-streaked blanket on the bathroom floor. I realized that anyone waiting in line for the loo was getting more than they bargained for in terms of in-privy entertainment, especially since the dress that seemed like it fit just a few hours before was now too tight and had to be hiked up to my hips, so I could get on my knees and try to do something about the mess I was in. Literally.

Eventually I gave up, hosed the kid down in the sink, wrapped him up buck naked in the streaky blanket, buckled him back into his poop-filled car seat and hobbled out of the restaurant with spit-up still sliding down the back of my dress. I swear our car smelled like a port-a-potty at a barbecue cook off for the next two weeks.

I made Jim promise he would never, ever, take me to Mother’s Day Brunch again. A promise he has kept for the last 13 years. Instead, we go to Pizza Street, pig out on cheeseburger pizza with pickles, fill up on soft serve ice cream and call it a day. It’s a ghost town at Pizza Street on Mother’s Day and we can basically order anything we want and they have to make it for us–our free personal pizza chefs. Little slices of non-brunch heaven. It’s just the absolute worst and yet totally the BEST.

Now over a decade into motherdom,  I still think Mother’s Day is pretty ridiculous. A made-up holiday to guilt dads and husbands into driving to Target and standing in line three deep to pick out the “perfect” $9 card on Mother’s Day Eve. I’m not kidding. My friend Rosemary took this picture today in her local Tar-Jay and I couldn’t even handle it: 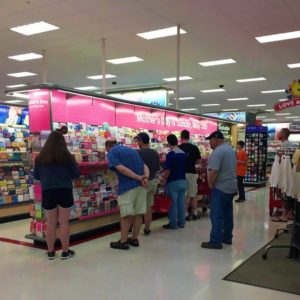 When you care enough to wait until the last minute…

Tomorrow I’ll be at a soccer tournament with my daughter while the rest of my family is two towns over at a baseball tournament. I doubt we will even be in the same county together, much less a meal. It’s basically like every other Sunday in the spring and that’s fine with me. But since it’s also a day where I get to ask for whatever I want, I’m not missing that opportunity either!

So here’s my Mother’s Day request, Jim Godfrey: Give me a “Mother’s Day Off.” Not tomorrow. Maybe next week, maybe in a month, but I am asking for an entire day to NOT MOM. Mom as in the verb, not mom as in the noun. 24 hours to do none of the momming. That’s it.

Let me break it down for you:

MOTHER’S DAY OFF EXTRA-CREDIT: When I walk in the door from my day of un-momming, kiss me, hug me, tell me how terribly exhausting your day momming has been, how you don’t know how I do it, and how being a mom has made you love me even more. That all my kid-produced gray hairs go so well with my bloodshot eyes. That I look really sexy in stained sweatpants and my 20-year old sorority t-shirt with the hole in the side. That I make a mean boxed mac-and-cheese. And that if you knew then what you know now, you’d have picked me all over again.

This is what I want. Just this. Please and thank you. And don’t worry for one second that I don’t absolutely adore my kids. I am crazy head-over-heels in love with them. And I know that I am the best mama when I take care of myself too. Thanks for my sweet babies—being their mom exceeds all my expectations for how crazymadlywonderful motherhood would be. 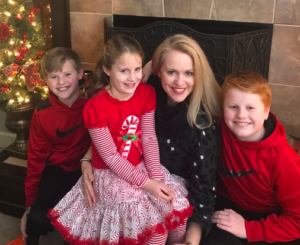 From last Christmas, the one day of the year that I insist all my children stop fighting with each other for 5 seconds and take a picture with me.

Husband of mine, I love you. Parenting with you has been the hardest and most meaningful adventure of my life. It’s made us crazy and it’s made us stronger and it’s made us wrinkly and it’s made us more patient. Thanks for sharing the journey with me. You were right when you said it was probably time we started to think about having kids all those years ago. I wouldn’t trade a minute! 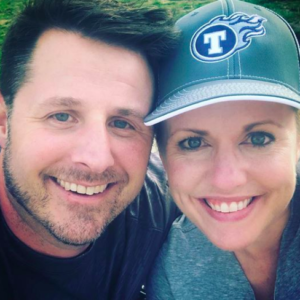 How we’ll probably spend Mother’s Day, except not together. Go Titans!

Now, bring me my mimosa. But not at brunch. xoxo, Holly