My mother-in-law, Kathy, is very, very sick. She’s been to three hospitals in two months, the last two she arrived by ambulance transfer. I’m not getting into the details of her quality of care during this time, except to say that she walked into the hospital for a simple procedure and was supposed to be back home in 3-5 days. Two months later, our hopes have all but vanished that she will ever walk out of the hospital, much less return home.

My mother-in-law raised three boys, my husband is the oldest. When I came into the picture, she had been serving as the matriarch of the family for as long as anyone could remember. I had never met a woman quite like Kathy. All the women in my family, going back to my great-grandma’s on both sides, wore their independence like a badge. They never asked for anyone to lift a finger for them. Fiercely independent, sometimes to a fault.

Kathy was the opposite, and preferred to ask for help for anything from getting the remote control to getting her a glass of water. If it sounds like I am being negative about her actions, please know this is not the case. I mean, she literally had 4 men ready to jump at her call at a moments’ notice—that’s pretty impressive.

When I came on the scene, with my own needs and wishes, we fell into the typical mother-in-law/daughter-in-law roles. Once Jim and I were married, and especially once we had kids, it was evident that she was trying to learn how to adjust to the new role—and as a new wife and mother I pushed back by claiming my territory.

There are so many “mother-in-law” stories to share…like the time she recorded me singing at her great aunt’s funeral and proceeded to play it at funerals she officiated for the next 15 years without telling me (she even had the recording transferred from tape to CD at some point along the way).

It’s a pretty predictable story. When Jim and I got married, everything surrounding his family was unfamiliar. Everything they did was completely opposite of what I’d grown up with. So, naturally, my way was superior—right? When you’re fumbling through a new marriage, and then motherhood, you’re looking for anything that resembles familiarity, and my in-laws couldn’t have been more different. I pushed forward with my own path, and more than once butted heads with Kathy.

But then the unfamiliar becomes the familiar. The mother-in-law that wasn’t at all like me adored my kids. Kathy and my father-in-law took my kids every Saturday night for years, so that Jim and I could have precious time alone. She and I eventually had our own jokes and secrets that cemented our not-always-easy relationship.

And she gave me the gift of her son, which as I have grown into motherhood and realize it won’t be long until my teenager walks down his own aisle—will come with tears and struggles of my own.

I hope that my future daughter-in-law’s, if I am lucky enough to have them, will be kinder than me. History says that’s probably not the case, though. I’m sure my she’ll want to pursue her own path and create her own territory, and that might mean it takes a while before we can build the bridge between in-law and just daughter. I hope I don’t push too hard, or expect too much. But I probably will, because that’s what mother-in-law’s do.

As I pray for my mother-in-law tonight, and for our family, I realize how she and the rest of my “second family” have woven themselves into the tapestry of my life. How we support and hold up each other. And, despite our differences, how very important we are to each other.

I bought this poem for Kathy right after Jim and I got married, and it hung in her living room for years. I know that both of us probably wondered if many of the lines would ever ring true. After years of growing, sometimes together, sometimes apart, we have finally reached that milestone. 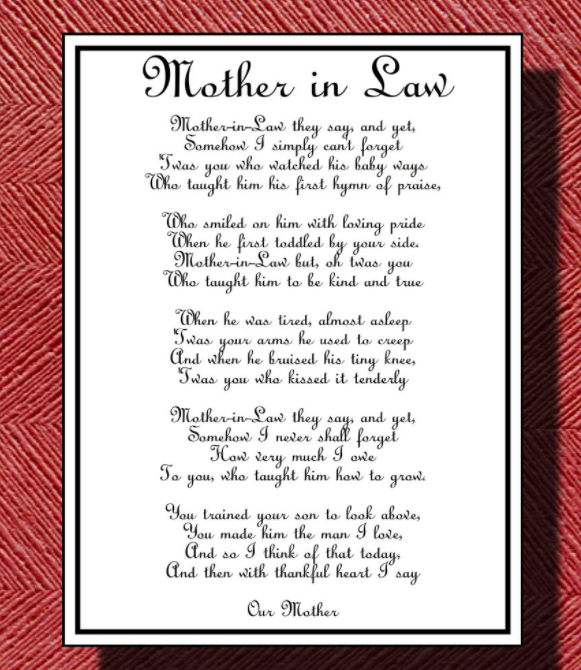 If you’re reading this, can you do me a big favor and pray for us? It’s going to be a long, hard road, and we could use all the positive energy you can throw our way. Thanks. xoxo

And I could use a smile or two, so please share your favorite “mother-in-law” story with me in the comments below!