I had a rough week last week. Lots going on right now with things that are out of my control, and I thrive on order and control. I’ll admit, my self-care wasn’t the best either, which usually makes it worse. When these waves of struggle crash around me, sometimes it’s hard to explain the feeling to people that don’t experience anxiety and attention disorders. Well-meaning friends and family members will often tell me to focus on the positive, to “look for the light at the end of the tunnel.” I thought it would be a good idea to explain why that’s actually not only unhelpful, it can make me feel worse. So, here’s what I wish you knew about my panic attacks.

First of all, let’s talk about that tunnel for a minute. If people with mental health disorders felt like they were going through a tunnel, headed toward the light, it would be a relief. It’s horizontal. You can remain upright and walk through a tunnel. A tunnel protects you from the elements, and though it may be dark, it is generally safe. A tunnel is usually created to make an easier path through something else. TUNNELS MAKE SENSE.

When you have a mental health disorder, the bad times don’t feel like you are in a tunnel. Instead, you feel like you have fallen into a deep well. Every inch toward the exit requires excruciating effort, digging in with everything you have, pulling yourself up while trying to gain any kind of footing, slipping and sliding with each try. Knowing in the back of your mind that you are not in a safe place and that another storm could come along at any moment and send you back down to the bottom again. For me, this feeling physically manifests itself as chronic panic attacks.

I suffered my first panic attack about 5 years ago, and they eventually got so bad that I had trouble leaving my office at work for fear I would experience a panic attack in front of the therapists I managed or in a meeting. I was nauseous when I woke up in the morning and before long was throwing up multiple times a day from the debilitating physical, mental and emotional pain caused by the attacks.

I finally went to a therapist (who shall forever be known as Martha the Great) and was able to get a handle on them to where I could function somewhat normally again, but the next panic attack is never far from my mind. My panic attacks seem to simmer like a pot of water on low on a back burner just waiting for the heat to crank up and the water to boil over. I’ve learned to live with them, but it hasn’t been without loss of sleep, friends, and ultimately a job that I loved. Fortunately, there have been a few positive take-aways too.

Here’s what I’ve learned about panic attacks over the years:

Mental health disorders are hard, and panic attacks suck. There’s no way around it. Unless you experience them, it is very difficult to understand the strain they put on your physical health as well as emotional health. If you suffer from panic attacks, you can always reach out to me for support—I’m here for you 100%. This is a safe space for you to share your feelings. I get you. I’m here for you.

If you know someone who suffers from panic attacks, give them extra space and love and be sensitive to their needs, even if it might mean a change of plans, or an unexpected cancellation, or a change of venue or activity. Your reluctance to change will crush them, and it could eventually make you feel unsafe to them.

Trust is a very hard thing for someone with panic attacks, and you don’t want to lose it.

On the flip side, your support and willingness to bend for their needs will mean the world to them—we don’t mean to be difficult, and we need to know that you love and support us more than ever. 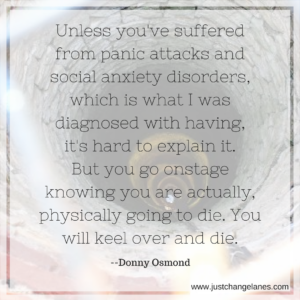