Tis the season of baseball, pool parties and one of my favorite guilty pleasures of summer time…garage sales. I LOVE a good garage sale, and have marked my calendar and even taken vacation days to attend the big ones in my area. The thrill of the hunt, the excitement when you score the perfect find…it’s all just too much fun.

I was driving around town today and saw a bunch of handmade signs for garage sales, and it got me thinking about the first garage sale I ever held as a newly-married homeowner. And it’s too good not to pass along. So here goes. 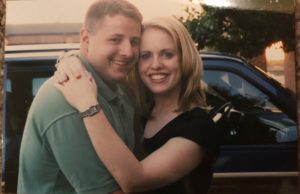 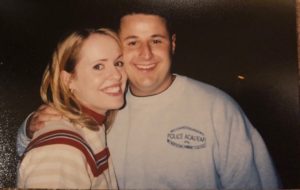 Jim and I got married in December of 2000, and had looked at houses for about four months before we married and couldn’t find anything that was “us.” So, right after tying the knot, Jim moved into my 600-ft apartment—our life during those months is definitely its own blog post for another time.

We barely had enough room to move around, much less unpack our wedding gifts, so all of our wedding and shower gifts were stowed at our parents’ houses. We figured we’d just wait to use them until we moved into our own (hopefully bigger) space.

When we moved into our first home in March of 2001, our parents delivered the wedding gifts that had been in storage. As I unboxed each gift and tried to find a place for it, I was soon overwhelmed by the amount of “not at all our style” décor items that we had accumulated as gifts that would never see the light of day at our new place. And most of these “um, no” items were gifts from my mother-in-law.

I had been married less than 4 months, and I was already shaping up to be the world’s worst daughter-in-law. Me of today would have had a much different response, but erase 20 years, 3 kids and a crapton more experience and at 23 I had a much more individualized—okay, SELFISH– perspective. But I digress. Back to newlywed me.

It’s not that I didn’t realize even at that time that my mother-in-law and I have very different tastes when it comes to our style. Not long after Jim and I started dating, I began to receive snow-globes from places she and my father-in-law would visit. Places I had never been nor had desire to visit. Places that don’t even get SNOW, for Pete’s sake! I’m sure I accepted the first one with a sincere “thank you,” but after the 3rd or 4th one I don’t think I could keep up the poker face. 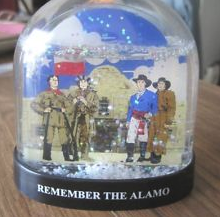 Remember the time it snowed at the Alamo? Me either.

My mother-in-law has different tasts in home décor as well. Her style veers toward what I lovingly refer to as “Estate Sale Chic,” mixed in with anything she finds funny or unique: antique chamber pots with plants growing out of the bowls, an antique organ that hasn’t been played since I have known her, a wicker wheelchair from the 1920’s. If it catches her eye, it has a place in her house. And it works for her and she has a lovely home…that looks nothing like mine.

However, in the spirit of giving during those dating and engagement years I received many items from her that would look perfect in her home and had absolutely no business being in mine: a large wooden goose magazine holder, Dusty-Rose pink flower vases with gold lettering of Bible verses, green and burgundy candles with brass candle holders.

She was also attending lots of Pampered Chef parties at the time and I had an odd kitchen menagerie of “what do I do with this” items like stoneware baking sheets, pizza stones, and mini-muffin pans. I’m sure she thought they were lovely at the time and now I would think they were awesome. But to the newlywed bride who barely knew how to boil water, they looked like dust-collectors and cabinet space-takers. And I’d be damned if they were taking up valuable real estate in my kitchen.

Besides the gifts from my mother-in-law, there were crystal knickknacks, bowls, picture frames and about a million things that I received from guests as wedding gifts that would never leave their boxes and I had no idea where they were going to go. Which brings up an important sidebar:

Pro wedding gift-giving tip: Please FOR THE LOVE OF THE BRIDE AND GROOM order something off their registry or get them a gift card from a registry place. Wedding gifts are not the time to go rogue, re-gift, or try to be “thoughtful,” unless you know without a doubt that it is exactly what the bride and groom will love. If the couple is like Jim and me, their marriage was probably in jeopardy a few times during the registry process due to the differences in what they wanted—the fight over why we were registering for china and not a new TV almost ended the engagement–so SWEET JESUS do them a favor and stick to the registry. Hallelujah, amen. 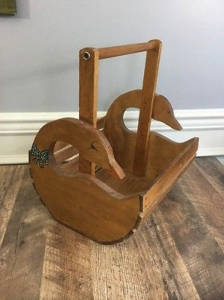 Not an actual picture of the goose magazine holder. But disturbingly close enough.

Anyway, to look at it all together was a little overwhelming. And in my 1200-square foot space, minimalism was the name of the game. So, I decided to have our first garage sale a few months after we moved in and get rid of anything that didn’t match my taste. I was determined to purge.

Our house wasn’t in one of those subdivisions that have universal garage sales, it was every house for itself. Since Jim and I were working full-time and had used all of our vacation days for our honeymoon, we decided to have the garage sale from 5pm-9pm on Friday night, after we got home from work, and then all day Saturday.

I threw myself into getting ready for the garage sale. It was such a “new wife-y” thing to do. I organized, marked, borrowed tables, made signs to go throughout the subdivision and ran an ad in the local paper. By the time the Friday morning of the sale arrived, there was no one that could enter our subdivision and not know about the epic garage sale awesomeness that was going to be happening in our cul-de-sac at 5pm. It was a thing of well-executed beauty. I was so proud.

The snow globes, the wooden goose magazine holder, the random crystal dishes would all have a new home by the end of the weekend. I went to work that day so excited.

And, so many best laid plans…disaster was lurking just around the corner.

I was at work that morning and received a message on my phone from Jim. “Hi. Just wanted to let you know that my mom is running by our house to drop a few things off. She’s just going to leave them on the kitchen table.”

I knew full well she was going to go into my garage. And there, perfectly marked and organized, were all of the gifts she had given me over the past three years. I was mortified.

I immediately called Jim to ask him to tell his mom ANYTHING to keep her from going into our house. But it was too late. The message was a couple of hours old, and she had already called him a second time to say that she had stopped by and delivered our things and put them on the kitchen table.

“She didn’t say anything. Maybe she didn’t see the signs,” Jim said. Whatever. Not a chance.

“Maybe she didn’t go into the garage?” That was about as likely as Jaws passing up a fishing boat. I was sure my mother-in-law had torn through my bargains like a ravenous shark on the hunt. And seen all of the stuff she’d given me.

I finished my day at work praying to God, Jesus and the saint of lost causes that my mother-in-law had not seen all of my gifts from her on display with masking tape pricing. I prayed that she hadn’t gone into the garage, that she had been in a hurry and had just left the items she brought on the table and left.

When I got home, I checked the kitchen table. The items she left were sitting there.

Then, like a horror movie where the camera zooms in on the one thing that’s not supposed to be there, I saw it. Written in her unmistakable 6th-grade-teacher handwriting, on a borrowed envelope from my kitchen drawer, were the words “Money from garage sale purchases.”

I had to grip the kitchen counter to steady myself. She’d not only gone downstairs to look at what I was selling in the garage sale, she’d actually shopped it! In a mad panic I tried to slow my heart rate by reminding myself that my college-age brother had brought over a lot of brand-name clothes, and maybe my mother-in-law picked up a few things for her youngest some, who was still living at home? Maybe?

I made my way down the stairs to our garage and sent up one more silent prayer before turning on the garage light to see the damage. And that’s when my jaw hit the concrete.

My mother-in-law had not touched my brother’s clothes. She had left the clothing table untouched, with every item still folded Gap-tidy and in a perfect pile. Instead, My mother-in-law had gone through every houseware, every décor item, every knick-knack. And every item she’d ever given me was gone. She literally bought back every candle, every Pampered Chef item, every snowglobe she’d gifted me for the past three years and left me an envelope full of cash. Nothing else was disturbed or purchased, just the gifts. SHE. EVEN. TOOK. THE. GOOSE.

My hands were shaking when I called Jim to tell him what I had observed. What should I do? Should I call her? Apologize? Give her the money back? I had no idea, no friggin’ CLUE.

In the end, I never said a word about it. And neither did my mother-in-law. I kept thinking that the goose would be re-gifted to me the following Christmas, or for a birthday, but in the almost 20 years following it has never happened. I gained some mad respect for my mother-in-law that day. And I knew that even though I was the new girl in the Godfrey household, the older model still had a lot of life left in her. 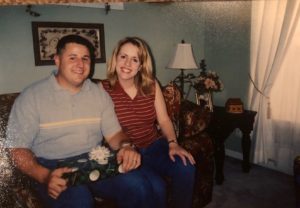 Even though we still don’t share the same taste in most things, I have never, EVER, even remotely considered selling anything she’s given me in a garage sale after that incident. I’ve learned that sometimes things need to grow on you a bit before you realize how much you actually love them, and how priceless they really are.